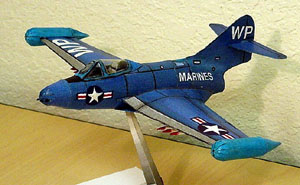 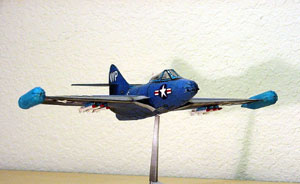 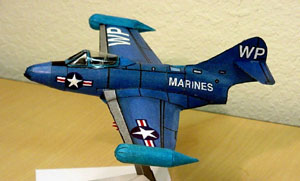 This was a very interesting Fiddlers Green model for me. Perhaps it's just the inherent beauty of the basic aircraft. Or maybe I've seen "The Bridges at Toko Ri" one to many times. Whatever it is, this is one of my favorite subjects and one that just isn't available elsewhere.

I have previously built a few of Chip's postcard models. And have downloaded the F4D Skyray and one of his P51's. All of those models went together very smoothly and without the need for modifications. As you can see from the photos, the F9F also made up into a wonderful little model. I did encounter a few places on this one which required some extra work on my part to come up with this result. I started by assembling the fuselage and tail sections. Here I found that the "flatten here" technique suggested in the instructions just didn't give quite the effect which I desired. So I added a small V-shaped fairing piece to help make a smooth connection between the vertical tail section and the vertical fin. Next I tried to fit the wings to the fuselage and found a couple of problems. The first was that the upper wing root needed to be trimmed about 2mm to get the wings to attach properly. The second was that the exact fore and aft positioning of the wings was difficult to determine. I decided to center the wings onto the square feature on the underside of the fuselage which left a fairly large section on the fuselage in front of the intakes which was supposed to be covered by the wings exposed. Since this area was more lightly colored than the rest of the fuselage it was fairly easy to darken it with a combination of felt tip and water color pencil to get a reasonable match in color.

At this point the model was taking shape quite nicely so I decided to add some features not supplied as part of the kit. The rockets, wing tanks, clear canopy, and some basic interior cockpit details helped to make this a very pleasing model for me. I would love to see this model updated with fixes for the fit problems that I've mentioned and with the addition of wing tanks, and maybe even some rockets and bombs since it's primary role in combat was as a ground support/attack aircraft.

In summation Chip did his usual excellent job of graphics and instrucions for this model. For the experienced cardmodeler the reward of creating a unique subject is well worth working through the minor problems with fit that I encountered on this model. And for the price the value of any of these models cannot be beat. I hope that anyone else who attempts this model benifits from my experence with it.

I would recommend that a beginner start with a different FG model however since I would hate for someone to have a frustrating intial experience with these fabulous models.