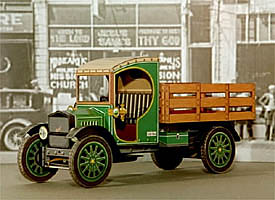 I've just finished an Alcan TT-Land 1927 truck model. It's not so much that I'm into trucks, but it looked very good at the convention last year. It is in 1/24 scale and measures 190 mm (7.5 in) long and 85 mm (3.4 in) high. It is printed clearly on very good paper which seemed thin at first. However, many parts fold back upon themselves, so the thickness was never a problem,

It is a very straightforward and highly accurate model. Inexpensive too. I like to use a few extra pieces of cardstock as braces however. I used one at the back end of the engine compartment and a few in the chassis so that they would hold their shape while being glued. I also cut thin card disks just a hair undersized and slipped them into the tire treads before gluing on the faces of the tires. I glued the first face circle to the disk and the tabs. That way they were nice and round. I don't know how I'd have kept the wheels round without the disks.

There are only a couple of things really wrong with the kit. One is that they put the differential at the front! Easily switched it with the identical size and shape rear axle (switch parts 4-D with 4-C). An identical model with a different cargo space (Alcan TT) has the parts numbered correctly. Part 2-D which connects the rear of the front fenders under the chassis is 2.5 to 3mm short (also wrong in the TT kit). This was the last piece that I glued, and I was shocked that it was wrong since the rest of the model had such an amazing fit. I simply cut the part in two. It glues under the frame anyway, so it is not noticeable.

One other thing that I didn't like is that Alcan uses dotted fold lines a lot which have to be retouched. I found that inexpensive watercolor and a good sharp #2 brush worked well. I also used colored marker in places. One thing that I would do differently is to butt join the tire rims and place the joints at the bottom. I overlapped them and placed them at the top under the fenders. I assumed that this would hide the joints, but it did not- a minor problem.

This model really is accurate. There's lots of folding things back on themselves and, if you score exactly on the line, they fold up just about perfectly. You can get Alcan kits from Peter Heesch at H&B Precision Card Models or Lou Dausse at Paper Models International. The final model has real charm. I'm thinking of locating some old 1920's street scenes and creating a small diorama. I'm looking forward to build some other of Alcan's ;offerings. 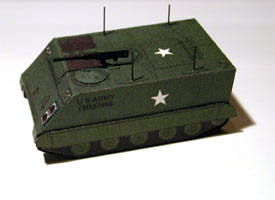 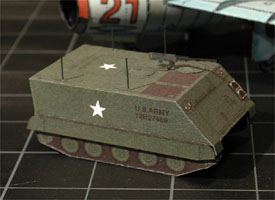 I recently assembled the US Army M113-A1 Armored Personnel Carrier model included in the Summer, 2000 edition of The Carformation Newsletter. This is the first armor model that I have built. The somewhat diminutive model (at least to my hands) measures approximately 2-5/8 in. long, 1-7/16 in. wide, and 1-3/8 high to the top of the antennae (67mm, 37mm, 35mm respectively-isn't the English System awful!). It is a semi-scale model at approximately 1/72nd scale.

I sprayed several light coats of acrylic sealer before assembly and was able to simply wipe away glue or water color from the surface. Construction is quite straightforward. The body is in one big piece, and careful scoring is essential. I used an empty extra-fine pen. The only problem that I noted was a slight dishing of the rear of the vehicle - barely noticeable. I'm not sure if it was due to my assembly or the design.

The bogies and treads were quite readily assembled. The instructions are clear and some interesting background information is also included. I used a small piece of extra tread on the front where two links are indicated for a three-dimensional effect, and used some fine green florist's wire (convenient color) for the small antennae. I made the antennae long enough to bottom out just above the bogies for extra support. The machine gun was a challenge of miniaturization, but came out nicely as did the entire project. 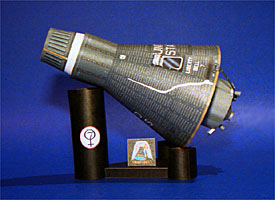 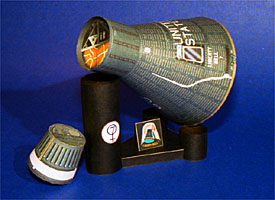 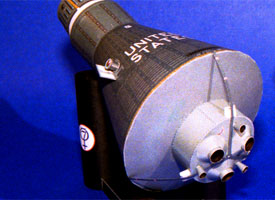 I really enjoyed building the Liberty Bell 7 from Dan Shippey's Delta 7 Studios. I think of myself as an aircraft modeler, but keep finding these interesting projects such as the Alcan TT-Land truck on this review page. In a personal communication with Dan recently I learned that this was one of his first designs. You'd never know it! The design and instructions are well thought out. The model came as an Acrobat (pdf) file with three pages of parts and another three pages of illustrated instructions. There are 26 clear photographic diagrams with text (in English). The Friendship 7 in the same series is virtually identical as far as I can observe with only a differing color scheme. Both models use the exact same instructions.

I printed out my model at full size on 90#/165g/m2 Exact Index (Saul's favorite) using six colors (CcMmYK) with a Canon BJC-6000 printer. The model is sizeable at a full length of approximately 7.4 inches/18.7 cm. Dan suggested to me that I do a butt joint on the seam of the capsule body and that worked just great. I also did the same for all but the tiniest parts. However, there are a couple of tiny rocket nozzles for which this would be impossible. The retrograde nozzles for example. To keep up the appearance, I just turned them over after coloring the edges and gently sanded the overlapping edge to a thin wedge using a nail board. This was easy on this model since I had colored the insides black.

I sprayed 2 light coats of a UV-absorptive acrylic spray on the parts. Thishad the effect of sealing the surface so that marker wouldn't bleed in fromedges which I had colored. I used colored pencils and markers to darken the various edges. Weldbond was my main adhesive. I've written about it on the CardModelers List before. It is a modified PMMA with low water and a quick grab. It dries crystal clear and adheres very well to almost anything.

On this model, as well as on the TT-Land truck, I found it very useful to insert some light card formers for strength and to hold shape. In a few
places on the Liberty Bell 7 the added formers provide an excellent
gluing surface making assembly much easier:
1. I glued the Recovery Top to very light card to shape and add strength to the Recovery Compartment.
2. I glued a light card circle at the rear end of the Retro Pack Base to shape and provide a gluing surface for the Retro Pack Top.
3. I placed card disks at both ends of the Radio/Antenna Can for the same reasons.

The fit on this model is generally excellent. The recovery compartment was a tiny bit too large to fit snugly over its adapter, so I placed 4 small card shims radially around the adapter. The heat shield installs nicely but requires patience. Glue tabs both to the right and left checking as you go.Another tip would be to very carefully mark the location of the Retro Pack before gluing it on. I left the center piece of the heat shield off, since the Retropack covered the opening anyway. A very good display stand is included with the model. For appearance, I colored the insides of the vertical tubes on the stand with marker.

This is a very impressive-looking model, far exceeding what I thought it would look like when I first printed it out. It requires only basic cardmodeling skills, and really is a good teaching tool in itself. The Retro Pack really looks great with its collection of nozzles. I highly recommend this model for beginners and more experienced modelers alike. I recently completed the Beta version of Dan Shippey's Delta 7 Studios Rogallo Wing Gemini. Much of what I liked about Dan's Liberty Bell 7 applies to this model as well. This builds up into a great-looking model, and the first page of parts is a beautiful work of graphic art by itself. It is done in a smaller scale (1/24), and measures 125 mm./5-7/8 in. long, and 110 mm./4-5/8 in. high on its landing gear. This Gemini capsule was originally intended to land using a flexible Rogallo wing, but never actually flew. If any thing this model is even better than the Liberty Bell, and I liked the Liberty Bell a lot!

I printed it out on Exact Index 90#/165g/m2 with my Canon BJC-6000. Recently I discovered that some dark subjects print more clearly on cardstock with this printer. However, it looks just fine. I sprayed two light coats ofKrylon Acrylic to seal and protect the surface. This allowed me to use markers as well as colored pencils on the cut edges. I used Weldbond white adhesive for most of the joints except when laminating where I used a Fiskars glue pen.

Assembly is quite straightforward in this model. There are two pages of parts to print, and five pages of very clear diagrams and instructions. Dan uses close-up photos to guide the assembly, and they are wonderful. I made only a few minor modifications to the model as I proceeded:
1. I doubled the RCS Faceplate B with light card since it supports the front landing gear.
2. I widened the Reel by approximately .5 mm so that it would fit in the Winch perfectly.
3. I used the paper handle from a sucker for the RCS support. (It's Paper! - good Tootsie Roll Pop too!)

The Heat Shield was easier to attach than that on the Liberty Bell, becausethe tabs are on the body of the Gemini. It is necessary to work right andthen left around the circle. The fit was very close, and I was worried thatit would not be big enough, but it just made it. I suggested to Dan that he might make the shield .5 mm. bigger in the final version. I would rather trim a bit than come up short. It is easy to reach in through the nose with a dowel or other object to hold the tabs in place while the glue sets.

Take care in gluing the Window Indentations to the body. The curved edge should end up aligned with the opening. I allowed a slight overlap on oneside, but it doesn't detract from the model. Glue one edge and then the other, allowing the first joint to set up in between. One other area that could use a bit of care is the body at the front end of the Window Indentations. At that point it is just a very narrow strip of paper between 1 mm. and 1/16 in. size. I would reinforce this with a piece of light card to protect it. The small details on this model assemble quickly, but add a lot to the great overall appearance. I highly recommend this model.